Normal monster: Blue eyes white dragon. Yeah yeah I know probably majority of the fanbases favorite normal monster but can you blame me? I especially grew to love this card whenever I would see the summoning animation of this card in the world championship games. Truly amazing.

Effect monster: Mecha Bunny. I honestly have no clue why I enjoy seeing this card so much. I just rly love this mechanical bunny.

Fusion monster: Blaze Fenix, The burning bombardment bird. I'm honestly not very much of a fusion person but man do I love this card.

Ritual monster: Honestly....I actually don't care for any ritual cards. I could never really get into liking any kind of ritual deck.

Synchro monster: Blackwing Armor Master. Given that synchros are my favorite summoning method there are a LOT of synchros I love. Armor master takes the cake from all other synchros because of my history with it. Being Crow's main card in 5D's, being a blackwing, rival card to my best friend's favorite card (X-Saber Souza), ect. This card not only is my favorite synchro but is also my favorite card overall.

Xys monster: Galaxy Eyes Photon Dragon. I'm actually a fan of Kite from Yugioh Zexal. I grew fond of this card not from playing it, but from watching him duel in the show. While I actually don't care much for xys summoning as a whole, this is one of few I actually like.

Pendulum monster: Mayosenju Daibak. At first whenever I heard of pendulums and watched through the show Yugioh Arv V I was really excited for the summoning method and actually liked it a lot at first so I searched for pendulums that I'd think I'd like and ended up with yosenjus. Nowadays pendulums kinda give a bad taste in my mouth and I'm just not as into them but yosenjus will definitely stay in my heart.

Link monster: Crystron Needlefiber. Since links are still not very much fleshed out and sorta new still I actually don't really have a favorite among these yet but this card definitely changed my view of the new format and gave me hope to keep dueling mainly because this single card helps synchro decks TREMENDOUSLY. Like without this card, no synchro deck can do nearly as good(well some can but yeah this card helps regardless).

Trap card: Follow Wing. Honestly traps would have had the same problem as spells in choice but this card right here is just amazing. I got this card in a random pack I bought and found it and was blessed to have known its existence ever since. The powerful synchro support along with being a pretty nice looking card as well it's truly enjoyable.

Archetype: Blackwings. Most of you who know me knew this was coming. I started my road with blackwings in yugioh 5D's world championship 2009. It was in that game I had actually discovered that I loved winged beast the most and made decks for two archetypes, harpies and blackwings. It was then after seeing Crow duel in Yugioh 5D's that I had chosen Blackwings to my favorite archetype and it hasn't changed since then.

Attribute: Dark. Even before Crow I was already more leaned on Blackwings because they were dark attributed. I've always found that I have had a love for dark monsters and barely used anything else. Later down the line tho I also developed a liking to wind monsters but at the moment I still feel I like dark is my favorite.

Type: Winged beast. There's honestly not that much going on for winged beast but I still love them regardless. Actually, that's a lie....winged beasts are honestly really growing and becoming more known in time. I love this type mainly because I just love winged creatures in general.

It's gonna be hard to pick just one card from each category so I'm gonna mention whatever comes to mind first.


Normal monster: Elemental HERO Neos. The mascot of the HERO archetype. While it isn't exactly the most impressive tribute monster I find myself fond of its unique combos in fusion, contact fusion and multiple support cards. Its outer space theme is also really nice.


Effect monster: Armed Dragon Lv10. This monster helped me a lot in my YGO GX Tag Force playthrough with its ability to wipe the board by discarding just one card from your hand. Elemental HERO Bladedge is an honorable mention because it looks really cool and does piercing damage which is among my most favorite monster effects.


Fusion Monster: Elemental HERO Shining Flare Wingman. This is not only my favorite fusion monster but my favorite Yu-Gi-Oh! card by far. It has everything I'd want in a monster, best design, best effect. Its effect fits my style perfectly in going all out, it gains 300 ATK points for each E.HERO monster in the graveyard which is kinda symbolic, it tells you that Shining Flare has the support of his friends and allies, that he's fighting for their sake. The other effect is my absolute favorite, get this, after the damage calculation it takes the ATK points of the destroyed monster and fires them right back at the opponent. Allowing for massive damage output. The card is very vulnerable to getting its effect negated or getting destroyed by other card effects but that's the thrill of using Shining Flare in my opinion. High risk high reward. 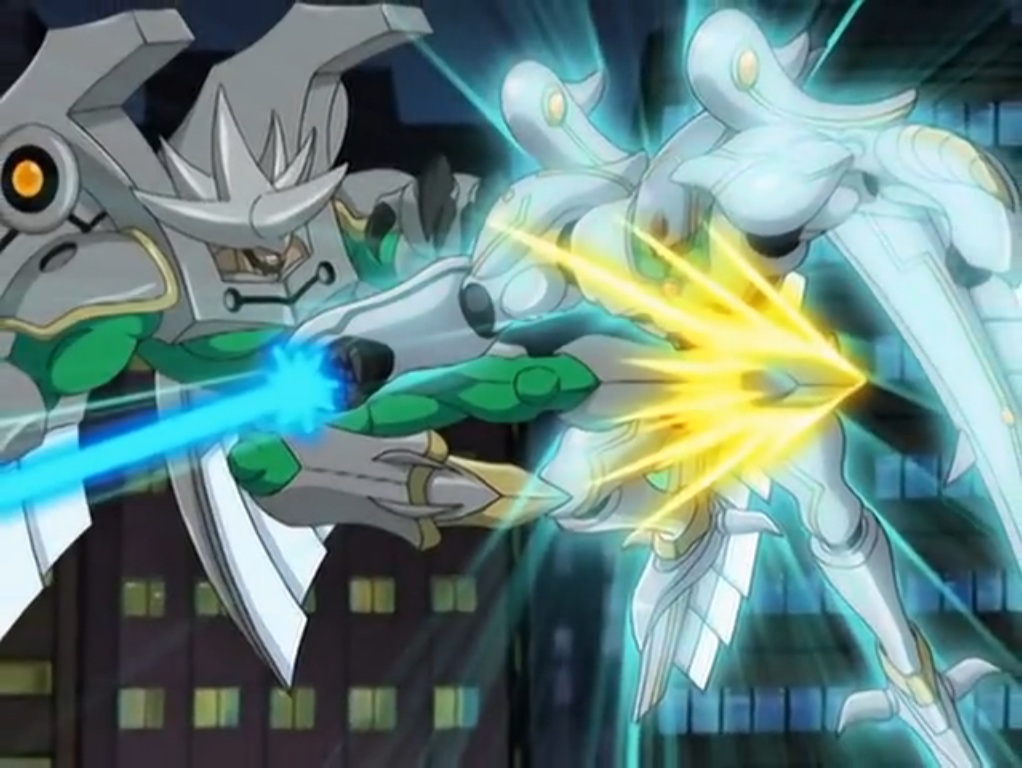 Ritual monster: Blue-Eyes Chaos MAX Dragon. 4000 points in ATK. Unaffected by card effects and deals piercing damage. Everything I like in one package.


Synchro monster: Stardust Dragon is the only Synchro I found myself using consistently for a while, I also really dig its effect and its awesome Trap card Starlight road. Red Nova Dragon could've beaten it to the cake but I don't really use it at all. My favorite Synchro might change if I end up using them more.


XYZ: Cyber Infinity Dragon. When I heard that Cyber Dragon archetype got nice support in the recent eras I was surprised. And it was such a pleasant surprise. These 2 XYZ cards are so easy to summon and have really fantastic effects. I just can't pick a better one.


Pendulum monster: I barely used Pendulums if at all, but if I ended up liking them at some point I imagine my favorite archetype would be the Dracoslayer.


Link monster: Decode Talker. It's a really awesome card that can work in pretty much every deck and provides great support for my Heroes that are completely reliant on fusion. It emphasizes even more on the "fighting for my friends" theme with its effect, it gains 500 points in ATK with each card it's linked to. Gaia Saber, The Lightning Shadow is a close second.


Spell card: It's impossible for me to pick just one spell card from all the usable categories so I'm gonna name one card from each of my two most used categories. First is vanilla, Polymerization. That card is the blood of my HERO deck and what allows it to function. Fusion is just a really cool concept in how allies unite to be even more power. Second is equip spells, United We Stand. Same reason, the power of your monster grows the more allies it has.


Trap card: Divine wrath. The modern metagame is full of heartbreaking effects, it's not funny when you take a long time to get your powerful fusion on the field it just goes away because of the effect of one monster. Divine wrath comes to the rescue, it doesn't cost LP like Solemn traps do while it also helps my combos in adding cards to the graveyards like Shadow mist and Necroshade.


Archetype: Elemental HERO. You already knew it, I was talking about it nonstop in the entirety of this post. I grew up with this deck and stayed loyal to it since the GX days. The idea of heroes uniting forces just really catches my interested. This deck also reminds me a little of you guys in how you're all different but also the same.


Attribute: Fire. I talked about this in the favorite Pokemon thread. I just naturally enjoy that attribute because fire overwhelms everything with enough heat. Nothing in this world can't be molten by fire.


Type: Warrior. I can't explain why exactly this is my favorite type but I found myself using it the most even outside of the HERO deck. They have great support with many categories of cards like Reinforcement of the army and Assault armor in spell.